When asked at a July 31 press conference about the potential risks associated with the technology, Lopez Obrador made it clear his incoming administration will change course.  “We will no longer use that method to extract petroleum,” announced López Obrador, according to the Associated Press.

If Mexico does this, it will join nations such as France, Germany, Bulgaria,and Ireland that have banned this controversial technology.

Fracking is an extreme technology used to extract oil and gas from shale and other rock formations.  The process involves injecting huge amounts of water, sand and chemicals at high pressure to free reserves trapped deep underground.  While fracking has been around for decades, it exploded in the mid-2000s, when the technology was combined with horizontal drilling and other technologies.

Fracking has also been the subject of much criticism.  While some have promoted this technology as a favorable alternative to coal, others have rightly criticized it as a “bridge to nowhere.” They have argued that the technology has led to an increase in methane emissions, a much more potent greenhouse gas than carbon dioxide, and slowed the development of renewable technologies.  In a 2016 piece for The Nation, climate activist and co-founder of 350.org Bill McKibben wrote, “One of the nastiest side effects of the fracking boom, in fact, is that the expansion of natural gas has undercut the market for renewables, keeping us from putting up windmills and solar panels at the necessary pace.”

A host of other concerns are also raised by fracking.  A 2016 report by the Environmental Protection Agency concluded that fracking has the potential to contaminate drinking water supplies.  A recent study by the Concerned Health Professionals of New York and Physicians for Social Responsibility linked fracking to a higher risk of asthma, birth defects and cancer.  The technology has also been connected to increased seismic activity.

Fracking has expanded rapidly in Latin America. Argentina, with its Vaca Muerta rock formation holding one of the world’s largest shale gas reserves, is considered the fracking capital of the region.  Colombia has been in the exploratory stages of embracing this technology after the nation’s Ministry of Mines and Energy gave fracking the go-ahead in 2014.

But fracking has met with growing opposition in the region.  Earlier this month, activists and more than 30 legislators presented a bill to end fracking in Colombia.  Meanwhile, Uruguay instituted a four-year ban on the technology in 2017.

Mexico, with the shale-rich Burgos Basin on its northern border, has been coveted by private investors looking to exploit the nation’s reserves.  The nation opened itself up to fracking and foreign investment in recent years following the passage of a 2014 energy reform bill. In 2017, the country opened the Burgos Basin to private investment for natural gas exploitation.  Pemex, Mexico’s state-owned petroleum company, announced its intention to drill more than 27,000 wells in the shale-rich formations in the states of Coahuila, Chihuahua, Tamaulipas and Veracruz by 2045.

Although Lopez Obrador’s stance on fracking is encouraging, he has also spoken out in favor of ramping up oil and gas production in recent weeks, pledging to increase Mexico’s domestic oil production from 1.9 million barrels per day to 2.5 million.  Lopez Obrador has stated his administration will invest $9.4 billion in the state-owned energy sector and will oversee the construction of two new oil refineries.

Lopez Obrador offers an intriguing departure from Enrique Peña Nieto’s unpopular administration.  While his energy plan appears to be far from perfect, his decision to ban fracking should be considered a major step in the right direction. 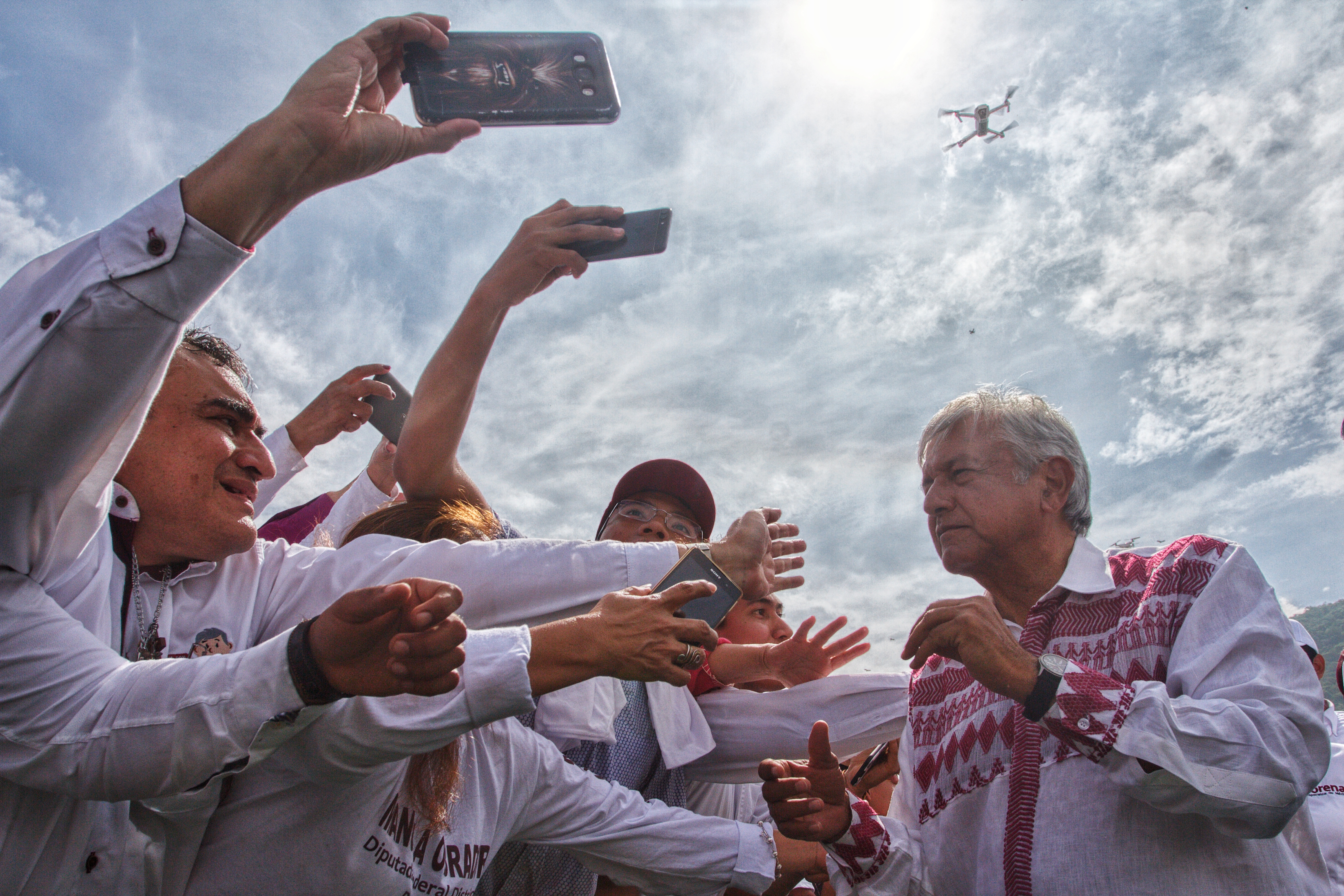 Mexico is in for a change, with the election of Andrés Manuel López Obrador and the coming to power of the National Regeneration Movement (MORENA) party.  What remains unclear is what kind of change and how extensive it will be.

On July 1, the former mayor of Mexico City, López Obrador, won the nation’s presidency in a landslide.  Lopez Obrador, or AMLO as he is often called, ran on a populist platform, promising to clean up corruption and combat inequality.

While his victory was welcomed by leftist politicians around the world such as British Labour Party leader Jeremy Corbyn, former Argentinian President Cristina Kirchner, and French politican Jean-Luc Mélenchon, he has also been treated with considerable skepticism. His brand of populism has been unfavorably compared to that of U.S. President Donald Trump and former Venezuelan President Hugo Chavez.  He has been called many things, such as a nationalist, leftist ideologue, pragmatist, authoritarian and centrist.

The election of @LopezObrador_ brings a new beginning for Mexico.

There is hope that the poor and marginalised will have a genuine voice for the first time in Mexico's modern history.#ALMO #AndrésManuelPresidente pic.twitter.com/JPXx630JBB

In recent years, Mexico has played an important role in international climate change negotiations.  Mexico hosted the 2010 United Nations Climate Change Conference in Cancún and has been a leader in climate governance on the global stage.

“Mexico recognizes its global responsibility with a solid commitment to mitigate greenhouse gases in order to nourish the new agreement to be adopted in COP 21 Paris, 2015 under the UNFCCC.” – President Enrique Peña Nieto

Mexico further solidified its position as a climate leader with the selection of Patricia Espinosa as the new Executive Secretary of the UNFCCC.  Espinosa, who served as Secretary of Foreign Affairs under President Felipe Calderón, replaced Costa Rica’s Christiana Figueres to lead the Secretariat in 2016.

The Rise of López Obrador

López Obrador’s campaign capitalized on a wave of global populism and a deep dissatisfaction with systemic corruption under Peña Nieto’s watch.  His message of fighting corruption, ending the drug war, and redistributing wealth resonated with a public that had grown weary of Peña Nieto and his Institutional Revolutionary Party (PRI).

López Obrador’s critical comments about President Trump also appealed to voters.  He has often spoken out against Trump and his demeaning treatment of Mexican people, going so far as to say: “Trump and his advisers speak of the Mexicans the way Hitler and the Nazis referred to the Jews, just before undertaking the infamous persecution and the abominable extermination.”

Despite being critical of Trump, López Obrador and the U.S. President have demonstrated a willingness to work with one another. During the campaign, López Obrador said, “I want a friendly relationship with the government of the United States, but not one of subordination.  Mexico is a free country, it is a sovereign nation. We will not be subject to any foreign government.”

It remains to be seen if López Obrador will build on the progress made by the previous administration with respect to climate change governance.  He did not emphasize climate change mitigation and adaptation and the implementation of the Paris Agreement during his campaign.

López Obrador has spoken out extensively on how to manage Mexico’s vast oil and gas reserves, calling for sweeping reforms in energy policy and pushing for greater self-sufficiency in the energy sector.  He has also pushed back against foreign investment in Mexico’s extractive sector, at one point declaring that he will make sure that oil does not “fall back into the hands of foreigners.”  What’s more, López Obrador and his designated Energy Secretary, Rocío Nahle García, have called for energy auctions to be halted.  López Obrador wants to increase Mexico’s refining capacity and exploit the nation’s natural gas reserves.

Earlier this year, López Obrador did meet with former U.S. Vice President and founder of the Climate Reality Project, Al Gore.  The two agreed to work together to promote renewable energy development and combat climate change.

López Obrador’s party, MORENA, emphasizes the importance of transitioning to renewable energy sources and reaffirmed its commitment to the implementation of the Paris Agreement in its 2018-2024 National Plan.  According to the plan, “An orderly, but accelerated, transition toward renewable energy…poses the opportunity to draw the country’s roadmap for the next generations from a clear strategic vision of sustainability to move toward a new civilizational paradigm of the future.”

At a recent press conference, Josefa González Blanco, who will serve as Secretary of the Environment and Natural Resources under López Obrador, presented an environmental agenda for the next administration that centered on mitigating and adapting to climate change.   Agenda items include a zero deforestation goal through the promotion of community forest management, strengthening of Mexico’s international policies to combat climate change, adoption of alternative technologies and raising awareness about climate change.

While there is definitely reason for optimism following López Obrador’s landslide victory, it remains unclear how he will approach climate governance.  The world will be watching.