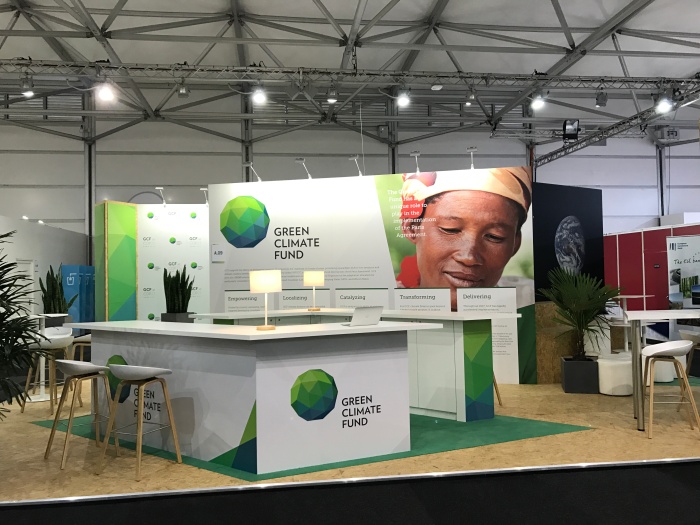 The issue of climate finance is slated to take on a critical role at the 2017 UN Climate Change Conference (COP23) in Bonn this November and build upon progress made in previous negotiations.  COP23 President Frank Bainimarama, who is the Prime Minister of Fiji, has made access to climate finance a “key pillar” of his presidency.

Climate finance, in the context of international negotiations, dates back to the creation of the United Nations Framework Convention on Climate Change (UNFCCC) in 1992. It was agreed that developed nations should “take all practicable steps to promote, facilitate and finance, as appropriate, the transfer of, or access to, environmentally sound technologies and know-how to other Parties.”  The Kyoto Protocol advanced the issue of climate finance, by helping to establish the Adaptation Fund, which finances projects to aid developing nations in adapting to climate change.

In recent years, climate finance has been at the forefront of climate negotiations.  The 2009 Copenhagen Accord calls for developed countries to mobilize $100 billion a year by 2020 to address the needs of developing countries.  The 2010 negotiations in Cancun lead to the creation of the Green Climate Fund, a fund for wealthier nations to assist developing nations in reducing their greenhouse gas emissions.  The Paris Agreement reaffirmed the $100 billion commitment set forth in Copenhagen.

Leading up to this year’s convention, key announcements about climate finance have been made. On October 16, the Asian Development Bank announced it would increase its financing to over $500 million between 2017 and 2020, more than doubling its previous totals. The following day, Fiji, this year’s host nation, became the first developing country to issue a green bond to finance climate change mitigation and adaption in this vulnerable island nation. 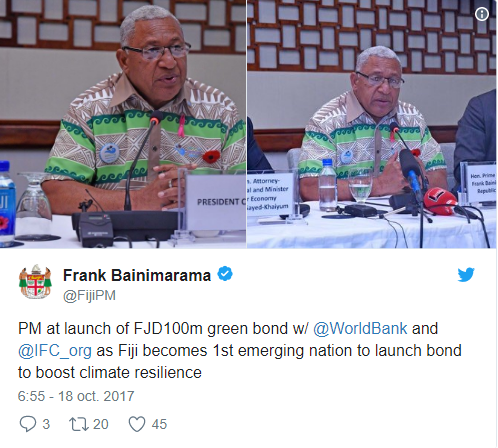 Joe Thwaites, an Associate in the Sustainable Finance Center at World Resources Institute, told of the significant role that climate finance is expected to play in the upcoming conference.

“This is the first COP hosted by a small island developing state, and with the impacts of climate change becoming clearer, a key emphasis of the negotiations is likely to be on support for the poorest and most vulnerable countries,” said Thwaites. “There is likely to be a strong focus on adaptation finance; funding to help countries deal with the impacts of climate change.”

Thwaites went on to say: “There are several concrete agenda items where this is likely to come up. Countries are considering how the Adaptation Fund will serve the Paris Agreement. In addition, they will review progress toward developed countries’ goal of mobilizing $100 billion a year for developing countries by 2020, and will provide guidance on how funding, particularly for adaptation, can be scaled up toward this. Negotiators will also be discussing how countries should account for, report, and review climate finance provided and received, and how developing countries can articulate their future support needs. Every year COP also provides guidance to the Global Environment Facility and Green Climate Fund.”

While there is a great deal of optimism coming into the conference, this has been somewhat marred by President Donald Trump’s decision to withdraw from the Paris Agreement and his attacks on climate finance.  In announcing his decision in a statement filled with half-truths and factual inaccuracies,  Trump blasted the “so-called Green Climate Fund” as a “scheme to redistribute wealth out of the United States.”

Since Trump’s decision came on the heels of a $500 million installment to the Green Climate Fund by President Barack Obama, there was considerable concern that the goal of investing $100 billion annually for mitigation and adaptation for developing countries could be jeopardized.  Still, the rest of the international community is poised to move ahead this month.

“The situation in the United States is obviously worrisome,” said Donovan Escalante, a Senior Analyst at the Climate Policy Initiative.  “However, I do not think it is sufficient to overcome the progress that has been made in the last decade to combat climate change.  We have seen enormous progress in reducing the cost of renewable energy, increasing energy efficiency and creating the political will to resolve the issue of climate change.”

The shift in policy by the Trump Administration has in many ways emboldened the international community as well as many local and state governments in the United States in the months leading up to Bonn.

“In the wake of Trump’s announced withdrawal from the Paris Agreement, 14 U.S. states and over 500 cities have committed to adopt, honor and uphold the Agreement’s climate goals,” said Thwaites. “Several cities and states have expressed interest in a collective effort to contribute to international climate funding. Other countries are also standing firm and delivering on their commitments to the GCF. So even if the U.S. federal government is withdrawing, there remains momentum behind the GCF and climate action more broadly.”