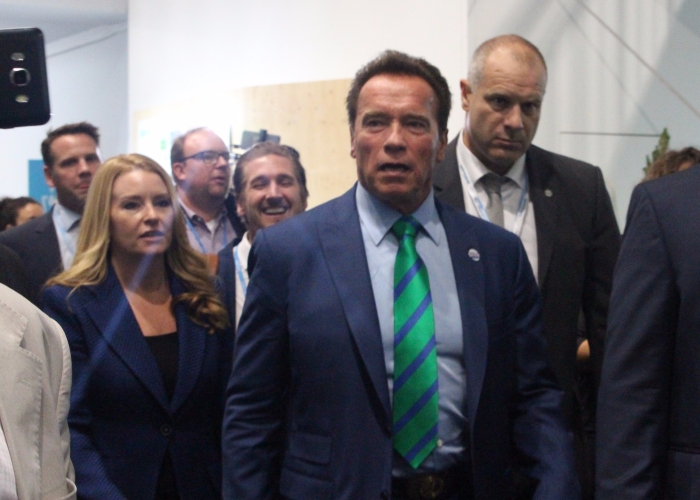 As negotiators prepped for the second and final week of COP23, we, at La Ruta, have been covering the events taking place in the Climate Action and Bonn Zones.

“These fast, urbanizing, growing cities, particularly in the developing world, are seeing that the path toward more fossil fuel use is a dead end,” Gore said.  “As a result, investors all over the world are seeing this opportunity open up.  When you cross the threshold, where renewables are cheaper than fossil fuels, it is not a minor change…All over the developing world and the developed world, we are seeing investors poised to put vast new flows of capital into this sustainability revolution, which represents the biggest investment opportunity in the history of the world.”

In a panel discussion with McAuliffe, Merkley highlighted the corrupting role money has had on U.S. politics in relation to climate finance.

“We need to kick the Koch brothers out of every state,” said Merkley.

The session on climate finance was followed by a panel discussion on the Business Case for Advancing Strong Climate Leadership and Policy in California.  The panel participants were Californians committed to the Paris Agreement, including Governor Jerry Brown, Chief Operating Officer of Fetzer Vineyards Cindy DeVries, Steve Malnight, Senior Vice President for Strategy and Policy of Pacific Gas & Electric, and Kaiser Permanente Vice President and Environmental Stewardship Officer Kathy Gerwig.  They discussed the role of the private and public sectors in California in reducing greenhouse gas emissions.

“If you get Trump, you get more carbon reduction,” said Brown.  “He gives carbon denial a bad name.  He is the poster boy for climate denial.”

Brown went on to say: “A little bit of Trump will go a long way.  Too much will destroy us all.”

Brown was highly critical of President Trump, but optimistic about how his presidency has mobilized environmentalists throughout the United States.

On Sunday, members from La Ruta del Clima joined speakers and panelists for a side event with the International Union for the Conservation (IUCN) on Youth Voices.  Speakers from the Independent Association of Latin America and the Caribbean (AILAC), IUCN’s Environmental Law Center, International Forestry Students Association (IFSA), YMCA’s Resource Group on the Environment and others talked about their work related to climate change and perspectives on this year’s COP.

“I do have hope. Or perhaps I am just forcing myself to have hope,” said Anna Pretel, an intern from the Environmental Law Center.   “But I feel that is just talking and talking in the negotiation and not action. If we want to solve this problem we have to act now. We are running out of time.”

View all posts by Sam Goodman