Recently, I was introduced to the organization CONPAH, the federation of indigenous nations of Honduras.  CONPAH provides a collective front to deal with some of the most pressing issues facing indigenous communities throughout Honduras.

Currently, CONPAH is working with the Honduran government in coordination with the United Nations to implement the United Nations Framework Convention on Climate Change (UNFCCC) on a national level. As part of these efforts, many international organizations as well as non-governmental organizations have been mobilized to carry out the objectives of the UNFCCC agreement. The UNFCCC entered into force on March 21, 1994. Today, it has near-universal membership. Honduras is among 197 countries that have ratified the Convention, meaning that they are held accountable to implement the goals of the convention within their national framework.

The Kyoto Protocol and the Paris Agreement both built on the UNFCCC to bring all nations into a common cause to undertake ambitious efforts to combat climate change and adapt to its effects.

The latest push by the Honduran government to implement measures to deal with the effects of climate change is part of these continued efforts. Honduras is reaffirming its commitment to reduce carbon emissions and develop a national strategy to implement measures against deforestation and environmental degradation. Honduras, in consultation with the international community, has empowered the secretariat of energy, natural resources, environment and mining, to develop a program, REDD or REDD+, for reducing emissions caused by deforestation and environmental degradation.

In order to realize the objectives of REDD/REDD+, the Honduran government, UN agencies, NGOs and other international organizations have rightly realized that they will need to work closely with indigenous people. It is among these communities that climate experts and environmental activists find their greatest allies, since they have a rich history of traditions that honor and intimately care for the environment.

Many indigenous communities have long adopted practices and cultural norms that tend to be in harmony with the environment. This is exactly why many environmental organizations have set out to incorporate these communities’ traditional knowledge and practices in the process of fighting deforestation and environmental degradation.

It was in this spirit that on July 4-7, 2017, the UN, government representatives, and various NGOs held a conference in collaboration with leaders of various indigenous communities in Tegucigalpa, the capital of Honduras. The purpose of this conference was to initiate a dialogue regarding the implementation of REDD/REDD+ as a means of facing the challenges of climate change. This process of consultation and direct communication with the indigenous communities and seeking their participation is essential to develop a lasting alliance with the indigenous nations to help prevent deforestation and environment degradation.

I also joined the conference as part of the Maya Ch’orti’ delegation, braving the nine-hour drive from Copan Ruinas with enthusiasm. After two days of intensive discussions, presentations and negotiations, CONPAH and the government agreed to adopt the objectives laid out by REDD/REDD+. It was decided that the communities would participate in the creation of a national strategic plan to help preserve the forest and cut back emissions to help Honduras meet its obligations.

Throughout the conference, leaders of the communities were among the most vocal advocates for the protection of the environment. The resilience and resolve of indigenous nations to preserve their territories really came through strongly in the meetings. The conference served as a powerful reminder of the connection indigenous cultures share with the environment.

Truly, international organizations, NGOs and governments can learn a great deal from indigenous communities, for they retain a wealth of wisdom and information regarding sustainable resource use and management. Likewise, indigenous territories can serve as a bastion where sustainable development and conservation can be practiced and implemented in keeping with indigenous peoples’ rights. Indigenous peoples’ territories are by law considered to be protected areas and are meant to be kept safe from exploitation at the hands of foreign companies and mining industries.  Although enforcing territorial rights has been a difficult process, at least recognizing them is a step in the right direction. 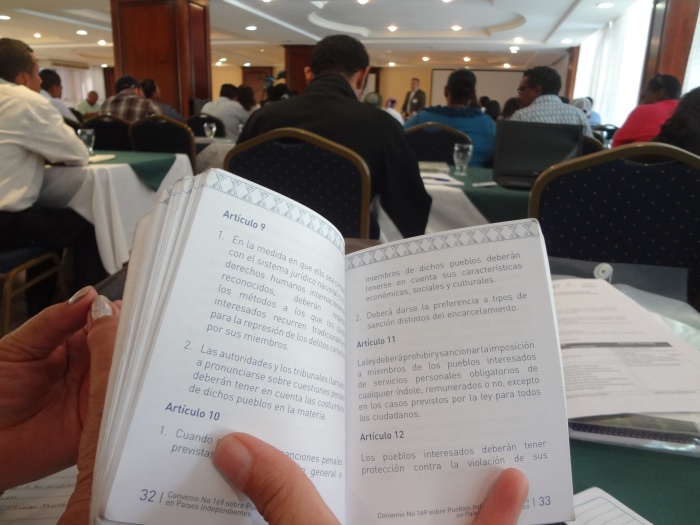 The struggle of indigenous people to gain recognition for their traditional territories in accordance with Indigenous and Tribal Peoples Convention, 1989 (ILO No. 169)  is highly relevant to the conservation efforts undertaken as part of REDD/REDD+. It is hoped that by making an alliance with the indigenous communities, community members may be empowered to carry out conservation efforts on their own territories to help respond to the effects of climate change. The UNFCCC and REDD/REDD+ may also give further credence to the indigenous peoples’ right to communal territory. The need to reduce emissions and preserve the environment will give authority to indigenous peoples’ struggle to secure and preserve their communal territories. Therefore, an alliance with CONPAH through REDD/REDD+ may offer a win-win situation to all parties involved.

The process of consultation and participation is a key aspect of the ILO No. 169. The conference in Tegucigalpa incorporated these two very essential elements. The event was a success because the authorities included an effective mechanism for consultation and incorporated the participation of indigenous nations. Due to this inclusive and participatory approach, the leaders of the communities felt comfortable to adopt the objectives of REDD/REDD+ and have agreed to help develop a comprehensive strategic plan to meet the goals of conservation and emission reduction. I am excited to be a part of this historic process.

In the near future, the National Council of Indigenous Ch’orti’ Maya of Honduras (CONIMCHH), the governing body for the Maya Ch’orti’ nation of Copan, will focus on the development of a plan for the preservation of the forest on their indigenous territories. I will also be involved in this process and will continue to advocate for indigenous rights. The best interest of CONIMCHH and the Maya Ch’orti’ nations is my priority, and If REDD/REDD+ can help reinforce indigenous peoples’ authority over their territorial lands, I will be very content. Any initiative or process that concerns indigenous communities and their territories must be entered into with the informed, prior consent of the community members and must incorporate their decisions and participation. All projects that deal with indigenous peoples’ territories must use a participatory process and take into account indigenous costumes, cultures and traditions as a way of developing a strategy that primarily meets the needs of the local communities.

I will end by presenting the following: Historically, in areas allocated as protected indigenous peoples’ territories, forest regeneration tends to be far more rapid, deforestation ceases and cases of extreme exploitation are far less likely. If nations and companies can learn to respect indigenous peoples’ right to their traditional territories, forests would have a chance to regenerate on these very same protected lands and exploitation would be dramatically reduced. It is with this intention that CONPAH and indigenous nations of Honduras moves forward with the program of REDD/REDD+. I am honored to be of assistance in this process.